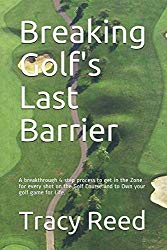 Imagine…After 3 weeks off from playing golf, you go to the range before the round and after hitting just 20 practice balls, a few minutes putting and a few minutes of short game practice, you are ready to play a round in the 70s.

Breaking Golf’s Last Barrier will show you how it’s possible using the the Active Awareness focus process to break down the hidden barrier that creates most of the frustration you experience on the golf course.

One of the biggest hidden barriers golfers face is built in to traditional golf instruction methods. Think about what has to happen in your mind in order to create any swing change your instructor recommends…

Your golf instructor sees a swing issue and tells you about it, giving you a change to make.

How do you know when you have made the change correctly?

Next, you want to practice so the change becomes a normal part of your golf swing.

When you are practicing, how do you know for sure you are still swinging the club the way your instructor wants you to?

If you take the time to think about these questions and answer them honestly to yourself, you understand the barrier. You may have a swing feel that worked during the lesson that feels the same during practice, but you’re probably wondering why the shots aren’t quite the same.

The barrier is that whether in person or by video you have to interpret what you are told or see into a swing feel. As your muscles warm up or cool down, that feel changes and the swing change isn’t the same any more…

When swing feel changes you are left with nothing but guesswork to make your golf swing for the rest of the round.

Before I explain I want to share with you how it was Ben Hogan that started my research into Active Awareness.

You see I didn’t have the silver spoon country club upbringing so many pros these days have. It was just me, some used clubs and whatever information I could find to improve.

Lessons were frustrating because they seemed only temporary. Books had theories and pictures but it was difficult to make much of it really work. Same with videos (see the issue with instruction above). I had a full library of books, magazines and videos that just seemed to confuse me.

Then quite by accident I met Robert, a pro who quickly set me on what I was sure was the right path.

During my very first lesson (which I won in a putting contest and attended rather reluctantly) with Robert, he quickly spotted my biggest issue and had me hitting balls amazingly well. When I asked what was different about his instruction, Robert simply said,

I was sure then that learning biomechanics would get me to a scratch game in no time. In just weeks I could hit just about any shot you could imagine…

But there was one glaring problem…

I wasn’t scoring any better on the golf course! I would still lose a shot or two that would end up ruining my round and leave me muttering,

“How do I stop the bleeding?”

But Robert had one saving grace…

He grew up sneaking onto the golf course by his house to watch Ben Hogan practice. Robert told stories of hiding in the trees and watching Hogan for hours. Robert would describe every little move Ben would make, including when he puffed on a cigarette. Every time he told a story new details kept me interested. “What was on the master’s mind as he practiced?”

One day during one of Robert’s stories, it hit me and I blurted out, “It sounds like Hogan was working on his balance!”

Robert stopped for a minute, thought, then said, “Yeah, I think he was.”

We were both a little amazed by the revelation, but for me it was the start of a long journey that led to this breakthrough shot focus process.

You see, in the end I realized that Hogan didn’t just focus on balance. But it’s important to understand that balance was his starting point for building great focus.

It took me years to work out the details but I didn’t give up. Gradually things started to click and I was no longer thinking about my golf swing but I was aware of it with total control during every golf shot on the course.

With this new Focus process golfers noticed a drastic improvement and started asking what I was doing differently.

Knowing they had to start with balance I told curious golfers I was just monitoring balance. Most didn’t believe it was that simple until I showed them.

Word spread and soon I was humbled by the many requests for lessons from golfers I barely knew.

So how does  the Active Awareness focus process work?

It works the same way your brain and body work together for any other action you make, whether it’s a simple as reaching for something, walking or running, or as complicated as driving a car or typing, all which we do now with little to no thought.

Think about how hard it was at first to drive a car. Looking back you might wonder why it was so hard. Simply put, it’s because you had to consciously think your way through all of the little details of driving. But once you got used to driving, the whole process was automatically handled in the subconscious mind. How else can you drive, talk on the phone and eat food at the same time?

Active Awareness is the bridge between the conscious and subconscious that makes the difference between enjoyment and frustration on the golf course. It’s the secret to great focus and you already use this process with many of the activities I described above with even knowing it.

I’ve taught Active Awareness to over 15000 golfers in 54 countries with amazing results and now I have written it all down in a easy to read book you can get online.

After many years of research and testing, there is now  a much easier and faster way to:

And you can use it:

Unlike other books that often just brush over the real details (to get you to go to some website and sign up for an expensive program), it’s all inside the book. Nothing was held back.

Breaking Golf’s Last Barrier will show you how simple Active Awareness is and how it allows you to improve and continue to build on your past improvements without losing all that you have built even after a long absence from playing golf.

Now the process of golf improvement has been simplified to four basic steps:

This site uses Akismet to reduce spam. Learn how your comment data is processed.